For some lighter reading, the Market Research and American Business, 1935-1965 team at Adam Matthew pick some of their personal highlights from the collection.

A glance at Dichter’s reports will tell you that women – and more specifically housewives – were unashamedly targeted as the ideal consumer in most, if not all, of his marketing campaigns. This is a point with which women’s rights activist Betty Friedan took particular umbrage against in a chapter of her 1963 manifesto The Feminine Mystique (click here to read the chapter, ‘The Sexual Sell’, in full).

A clear demonstration of this can be seen in Dichter’s 1945 report Electrical home appliances in the postwar world; a psychological study on women’s attitudes. In his introduction Dichter notes that “Home and family and all the functions connected with it are essential parts of the average woman’s life, whether she likes it or not”. However, he does concede that not all women are the same (phew!) and allows that there are as many as three ‘types’: the career or potential career woman; the pure housewife and the balanced woman who is capable of doing outside work and housework functions “satisfactorily”.

Neither the career woman nor the pure housewife are the perfect consumer however; the career woman (or ‘housework-hater’) has unrealistic expectations (“I want a mechanical maid… I want a robot”) and the housewife takes pride in doing things herself by hand and the old-fashioned way (“Of course, conveniences are nice… even if they aren’t quite so good”). In a sentence that no doubt incensed Betty Friedan during her study of Dichter’s reports, he notes that “It is obvious that the attitude shown by these women is not a very healthy one”.

It is important to remember that this report was drafted at the close of the Second World War – a time when women had experienced emancipation from the home and the drudgery of housework in favour of more demanding and fulfilling roles doing their part for the war-effort. Attempts were made to re-draft women back to their pre-war function of homemaker – a return to “gender norms” – whereas, it is clear as we read on, they were looking for an escape. 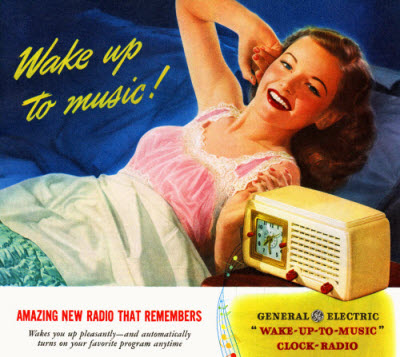 In a section entitled, “Women Become Inventors”, Dichter’s team ask their respondents what their ideal household appliance would be. The key criteria seemed to be saving time (and avoiding dirt and odour) in order to free themselves up for more meaningful tasks. Whilst the title was no doubt intended as a whimsical “what if!” we can see that it was from these women that the seeds of ideas for many successful appliances (that we take for granted today) were sewn!

Amongst the rather optimistic ideas for a bed-making machine, electric serving train (that would negate the need for a servant eavesdropping at the table) and mechanical aeration (for airing and turning the bed) women wanted: a radio alarm clock, a telephone message recorder, inter-room communication, a machine for drying dishes and an air-purifier.

If it is true that behind every great man there is a great woman, Dichter’s multi-million dollar success can, in no small part, be attributed to the scores of great women in his surveys.

On the President's Couch 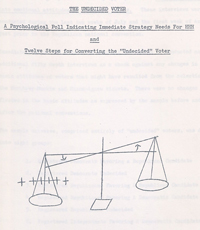 'The undecided voter unconsciously seeks (in the president) a psychotherapist. The voter wants the future president to help him understand himself (the voter) and the world.'

In 1968 the Institute for Motivational Research was hired by Vice President Hubert Humphrey – Democratic nominee for the presidential election – to develop a strategy “for converting the “undecided” voter”. Humphrey was lagging behind Richard Nixon in the polls for most 1968. This last minute commission was a desperate attempt to gain political ground.

1968 was a tumultuous year for America. Martin Luther King and Robert Kennedy were assassinated, violent race riots broke out throughout the country and the anti-Vietnam War movement reached fever pitch. In the midst of this unrest, many Americans felt misunderstood and ignored, as if “no member of the “Establishment” [was] willing to lend a responsive ear”. In order to win over these voters, researchers advised that Humphrey “should be the modern psychotherapist. He should demonstrate that he understands the deeper feelings of undecided voters.”

One suggestion was to have televised “fireside chats” with demonstrators and “law-abiding citizens,” to show Humphrey’s desire to understand other points of view. Another suggestion was to build connections with disaffected youth, who when asked about Humphrey said that he “doesn’t speak their language; he lacks “soul”.” Dichter’s ideas for addressing this influential youth minority, on whom “the coming election may hinge,” include establishing a youth council to advise the president. Overall, Humphrey should act as a “deeply probing, understanding, [and] mature man.” 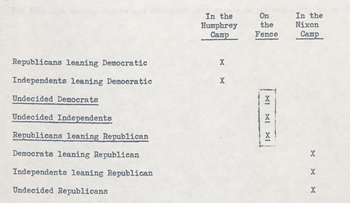 On one issue Dichter was extremely clear: Humphrey must distance himself from President Johnson. Johnson’s approval ratings had dropped steadily since he assumed office following Kennedy’s assassination, largely due to escalation of the Vietnam War and contentious social policies. By the time of the 1968 election his approval rating stood at a mere 43%. According to Dichter, voters “want to see a new man who will not be a carbon copy of Lyndon Johnson.”

Dichter’s report is likely to have influenced Humphrey’s late campaign tactics. Usually when Humphrey gave speeches he was introduced as the vice president and appeared with the vice president’s seal. In a televised speech in October, Humphrey was introduced as “Democratic candidate for president”, minus the vice president’s seal. During the same speech he set out a foreign policy plan which involved halting the bombing of Vietnam, a policy which differed markedly from Johnson’s. The move was a gamble, but it worked. Humphrey’s popularity began to grow, especially among the youth.

On 5 November Americans went to the voting booths. Although Humphrey ended up losing to Nixon, the popular vote was very close – Nixon finished a mere 0.7% ahead. Humphrey may have lost the election, but the idea of the president as psychotherapist survived either candidate. In 2008, presidential candidate Barrack Obama invited ordinary Americans to help shape the Democrat’s political platform. This new initiative was sold as a way for all Americans to “make their voices heard.”

This was the advice given by Ernest Dichter and his team in 1966 to E. I. Du Pont de Nemours & Company, Inc., creators of synthetic fabrics such as Nylon, Kevlar, and Neoprene. In this report The Institute for Motivational Research was asked to examine the so-called Peacock Revolution, a shift in male fashions that was taking place in 1960s America. So what did the future hold for American menswear?

After conducting a series of focus groups it became clear that barriers of status and age were two things set to be broken down, and it was predicted that this would have a significant effect on men’s outfit choices. For the older white-collar generation it was advised that Du Pont should create designs that incorporated bright colours with lots of pockets and buttons, thereby appealing to their ‘rebellious feelings’.

The most interesting aspect of this report, however, is the account of the blurring of gender boundaries that was occurring worldwide. Dichter’s team argued that ‘men are becoming more receptive to new clothing ideas … and “feminine” styles are losing the negative “sissy” connotation’. As a result of this it was felt that designs reserved for women would soon begin to be incorporated into the male wardrobe. Sleeveless blouses, lace shirts, and floral designs were just a few examples of future male looks.

The report included a selection of drawings that represented possible outfits of the future, as well as other styles that were shunned by the group of twentysomethings interviewed during the study. Dichter stressed, for example, that ‘men are not yet ready to accept all of the clothing worn by women… only 15% of our sample felt that men would be carrying pocketbooks before the year 1981,’ and ‘70% of our sample rejected the idea of a wrap-around cape’.

In a general sense modern readers will probably be surprised by the report’s accuracy in predicting future fashion trends. The 1970s and 80s witnessed an explosion of colour onto the streets of America, with pastel suit jackets and patterned shirts becoming the outfits of choice for the modern man. The 1990s, meanwhile, marked the introduction of multi-pocketed tracksuits made from new fabrics. This report analyses the relationship between fashion, one of the most iconic indicators of consumer culture, and the male consumer. It therefore provides as one of the most unique reports in the collection. 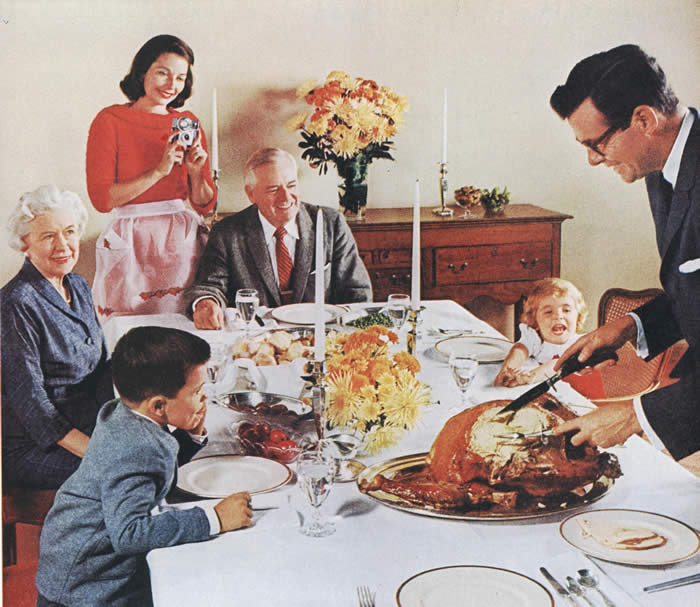 One of my favourite 1956 reports from Ernest Dichter’s Institute for Motivational Research begins: “‘What’s in a name’ asked Shakespeare some four centuries ago, but that is because he did not have to introduce a new camera into a highly competitive market.” This playfully worded 1956 proposal for Sawyers camera manufacturers goes on to discuss the new opportunities created by “the increasing penetration of women into regions of national life and social and recreational activity that were formerly the specific, exclusive preserves of men.” Fishing is cited as an example of an area with growing female engagement as is photography, the focus of this report.

The weight, colour, features and name of the Sawyer Nomad camera are considered in detail in terms of their appropriateness for the “specific, feminine needs” of this new market, both practical and emotional. It asks: “how can Nomad advertising and promotion most effectively convince [the female consumer] that she will be provided with these satisfactions by Nomad exclusively?”

It explores the possibility that Japanese electronics might be more popular with women because of the delicacy associated with Asian cultures, but it also questions whether the opposite might be true and that a traditionally masculine product might “appeal to their desire to take an aggressive role in the formerly exclusive male pastime”.

Like so many of the documents in Market Research and American Business, 1935-1965, this proposal is evidence of market response to rapidly changing social norms. Not only can it be read as proof of the increased leisure time and disposable income of families after World War II, but also of the increased agency of women in this era. The report also demonstrates a fairly progressive interpretation of femininity and how it is expressed, presenting “feminine needs” as complex and multi-faceted.

While The Institute’s work often compounded traditional, oppressive gender roles, this document hints at a capitalist form of emancipation; considering women as a substantial consumer market in their own right and placing the (albeit dubious) power of the consumer at their feet.